With the return of Birmingham’s beloved Peaky gangsters to our screens for another gut-wrenching series, allow me to turn the clocks right back to the initial scene where we meet Thomas Shelby for the first time.

A war-torn man whose presence demands respect, fear, and above all, admiration. I want to specifically focus not on the sharp suit, nor the piercing eyes, but rather the unique style of hair. Unique for us but very common for soldiers during World War 1. 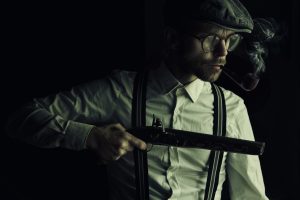 The hairstyle is inspired from military cuts of old. Troops would ultimately be left to cut each other’s hair during adverse times, inspiring the hair and makeup team to go with a disconnected undercut as you see with Tommy and his brothers.

Conveniently, it camouflaged the boys well. Combined with the suits and hats, it can be astoundingly difficult to differentiate between them. It is only when the hat is removed we truly see each individuals personality come to the fore. Some with quiffs and others with side partings. My personal favourite has to be Arthur’s, said to have the most sharp and aggressive hair style personifying the evil within him.

Whose hairstyle is your favourite?

Do you prefer the disconnected undercut or the longer curls on Cillian?