Virgil Abloh began his career producing t-shirts with text based designs. He had his designs printed at the Chicago based screen printing store Custom Kings. The manufacturer was impressed by how perfectly formatted Virgil’s designs were and offered him a job.

Don Crawley, a streetwear designer and manager, checked in with the store looking for a designer to do some work for his up-and-coming client going by the name of Kanye West.  The manufacturer suggested the new kid Virgil who worked hard on his designs, knowing exactly who Don was. Virgil Abloh and Kanye clicked easily, both holding similar ideas about fashion and general creative talk. It was at Fendi that both men interned and their relationship from there on blossomed.

In the midst of employing Virgil Abloh, Kanye had his first sneaker collaboration with Louis Vuitton. This collaboration led Kanye and his squad to the 2009 Men’s Fashion Week in Paris. An image of the squad was captured and ruthlessly parodied by South Park. It proved an iconic moment predominantly for Kanye. A man set to change the history of streetwear fashion and high fashion forever. Kanye reflects back on that moment noting how his iconoclastic style was a big turning point:

“Do you think there would be a Givenchy in the hood if it wasn’t for that South Park photo?”

Virgil Abloh honed his disruptive style creating Pyrex Vision, a cross between Champion clothing and Jordan’s famous 23. Kanye was seen in Pyrex for months and is thought to have elevated the brand to bigger acclaims. Pyrex Vision picked up bad press when people realised the brand was nothing more than a logo stuck on to existing Champion garments. Not only that, the brand was charging extortionate amounts for the few collections that were sold. Virgil Abloh halted Pyrex Vision quickly, merely regarding the brand as an art project.  He immediately began work on a new project: Off White. 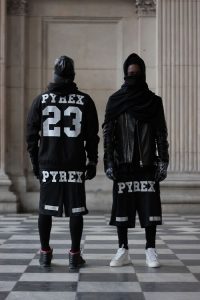 At this point Kanye was seen in numerous interviews, madly expressing his frustration at the fashion industry not taking him seriously as a fashion director. He outlined t-shirts as the sole thing he acquiesced to create according to those in the industry. Kanye pointed out that not all musicians knew how to play the piano. He certainly didn’t and so by that logic he shouldn’t even be labelled a musician. He was an artist and as an artist he should be able to express his creativity in a number of different ways.

“I shouldn’t be limited to only one place of creativity.”

Kanye’s outburst caught the eye of former artistic director of LV and current creative director of Dior Homme, Kim Jones. He took Kanye and Abloh seriously. Virgil notes the benefit Jones’ knowledge and experience would bring and neither he nor Kanye missed the opportunity to soak in as much information as possible from Kim. Abloh praises Jones in an interview discussing how Jones brought “forth street culture ideas through the high fashion system”.

By now, Kanye and Virgil Abloh went their own ways with Abloh wanting to pursue his Off White project brand. Abloh struggled to gain recognisable fashion writers to talk about the new wave he was creating.  He used Instagram to properly promote his brand and his connection to Kanye meant he also held a few high profile clients at his disposable. The likes of Jay Z and Drake. 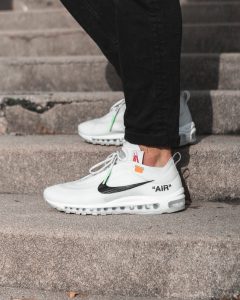 Let us immediately cut back to Kanye, who around this moment was in talks with Nike and Adidas about his own brand. He notes the difference between the two mentioning how Adidas offered him royalties as opposed to Nike:

“The old me without a daughter might have taken the Nike deal.. but the new me with a daughter takes the Adidas deal because I have royalties and I have to provide for my family.”

In 2015, Kanye dropped two Yeezy’s. The latter being the extremely popular low top Yeezy boost. Kanye had shifted the perception people had of Adidas sneakers, fashioning Adidas as a big game player next to Nike. 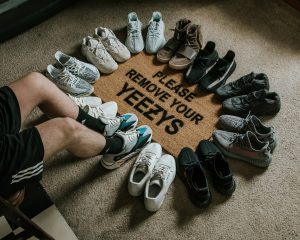 In 2017, Nike collaborated with Off White. The collaborations included sneakers from Nike, Converse, and Air Jordan. Abloh called the move “career suicide” as, given the sensitivity of sneakerheads, the collaboration could have had huge backlash amongst the purist sneaker collectors.

Kanye was always going to comment on Nike’s move mentioning how the hottest people at Nike used to work under him at one point, i.e. Abloh himself. He also comments that he has no hard feelings towards Abloh for taking the Nike deal because he understands the need to support ones family. It’s interesting to realise, at this time, both Yeezy and Off White were two of the biggest and hottest brands globally.

Even at their pinnacle, neither brand matches up to the grandeur of Nike and the even more luxurious, Louis Vuitton. LV is the apex luxury brand worldwide, the throne of which highly sought after by both Virgil and Kanye. 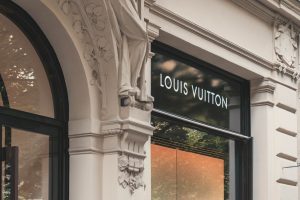 Kanye managed to secure a deal in late 2017 with the CEO of LVMH Bernard Arnault. Does the name ring a bell? You may have heard he overtook Jeff Bezos as the world’s richest man for a very brief stint this year after taking over Tiffany’s in a deal said to be worth $16 billion.

Kanye reminisces that the deal, involving some performances by Kanye himself, was dropped three months later. A few months after this, Abloh was appointed as the first African American artistic director of Louis Vuitton. The dream, for Abloh at least, had been realised. The role differs from a fashion director in the sense that he approves and is credited for every design.

LV’s decision to appoint Abloh comes with its controversy, given the position LV hold in fashion. Offering the most coveted job a fashion designer could possibly hold to someone with little to no pedigree in fashion design. Virgil Abloh revolutionised streetstyle alongside Kanye, but that does not make him a great fashion designer, perhaps not even a good one. Abloh cannot take a design thought up in his head and immediately transform it into a design sample. If he wishes to be established amongst the likes of Alexander McQueen, then he needs to learn the process of fashion design and he needs to learn quickly. Nevertheless, Louis Vuitton saw potential in Abloh and his destructive style.

“I felt like it was supposed to me. I was the Louis Vuitton don.” – Kanye

Kanye, as expected, was not the most joyful to congratulate his friend in his new position. This was Kanye’s big dream. Not only did he lose out on a huge deal with LV, his student now occupied the very chair Kanye had been climbing the industry to reach. This was a huge blow for Kanye. His vision to pioneer a different style of fashion to the masses had failed, in some part at least.

Kanye was hurt it was clear for everyone to see. He somewhat bitterly addresses how Bernard could have chosen anyone for the LV position, but decided to choose Abloh. Nevertheless, Kanye attended Abloh’s first Paris runway show soon after in 2018 and expressed his pride for Virgil. Kanye relives that moment in great sentiment recalling back to the South Park days:

Abloh still has a way to go to convince people he is the creative genius designer rather than the good marketer who can create hype around his products. But his collections have nevertheless been quite the hit. I would definitely urge people to check out LV’s 2020 Men’s Fall-Winter collection.